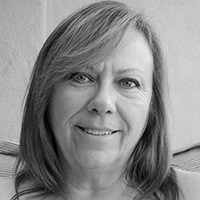 In FAMILY NIGHT, written, directed and produced by Alicia Dufour, a palpable sense of menace underlies the mundane nature of a family meal. The initially subtle promise of violence soon delivers as the elegantly coiffed and dressed mother turns on her husband, daughter and son.

Under Dufour’s sure-handed direction, the 12-minute-long short is beautifully shot by director of photography Symeon Platts, and skillfully edited by Simon Myers.

Effective makeup effects by Eric Fox’s Morbx FX give the film its punch as ‘Mom’ (Dufour) disintegrates at the staid dinner table, and again, in a climactic, shocking reveal.

Among the film’s notable achievements is an original score by Mark D’Errico that is alternately bouncy and creepy – as is the film itself.

Gather round the table for Family Night – but I’d advise you: don’t be late for dinner!