The family that dines together, stays together.

A desperate mother, feeling abandoned by her son, daughter and husband,
hosts a family dinner night that will keep her family together forever. 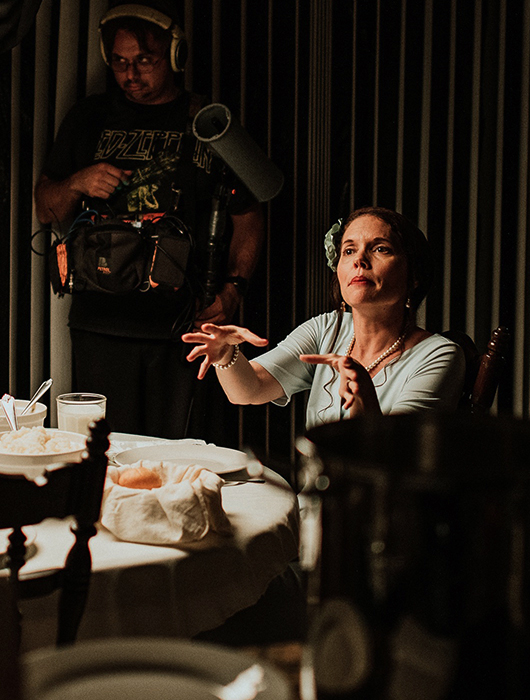 The idea for this film was one that came out of my desire to have a strong female lead with depth of character and unexpected layers… and gave me opportunity to use my background in Psychology. After feeling frustrated at the lack of roles I personally desired to play as an actress, I set out to write a screenplay that would give a female lead the ability to explore a wide range of emotions in a very short amount of time. I wanted a character that could take the audience on a journey with her, to have them feel for her and be shocked by her as well. So, yes, essentially I wrote this film to give myself the role I wanted. Yet, what started out as my first screenplay also eventually turned into my directorial debut. My dear friend and mentor who was going to direct the film, joined his wife to work on film projects out of state. He encouraged me to not only take on the role of producer and director, but to keep the lead role in the film instead of casting it to someone else, believing that I could pull it all off. I had almost no budget, no experience at producing, and my only directorial experience came from live theatre and some small corporate training videos. I am tenacious and resourceful, and I was humbled to find incredible actors and crew that not only were willing to help make this film, but were excited about being a part of it! We pulled off a miracle, shooting upwards of 20+ shots per day over 2 days.

I was inspired by the famous ‘Eye of the Beholder’ Twilight Zone episode to create a film in which what is real is hidden and what is visible is not necessarily the real story. Movies like ‘The Game’ and ‘Momento’ are brilliant examples of movies where the movie ends in a place that is unexpected and shocks the viewers. FAMILY NIGHT is not what you think it is either. The story of FAMILY NIGHT is one that is too common in our culture, and one that too many times has undone families and damaged lives forever.  Although this film is fiction, the reality is there are over 44 million American adults with a mental health condition and the number of those afflicted who have suicidal thoughts or violent thoughts towards others is staggering. We hear horrific stories in the news almost every day, where a mother or father has hurt themselves or their loved ones and the regular response is that no one saw it coming. Due to lack of education, lack of available mental health resources, or failure to accept the reality and severity of someone’s illness, these types of stories are all too common.

What lengths will a desperate person go to in order to hold their family together? What will a mother do to make sure she doesn’t lose what is most precious to her? The answer is simple: ANYTHING.